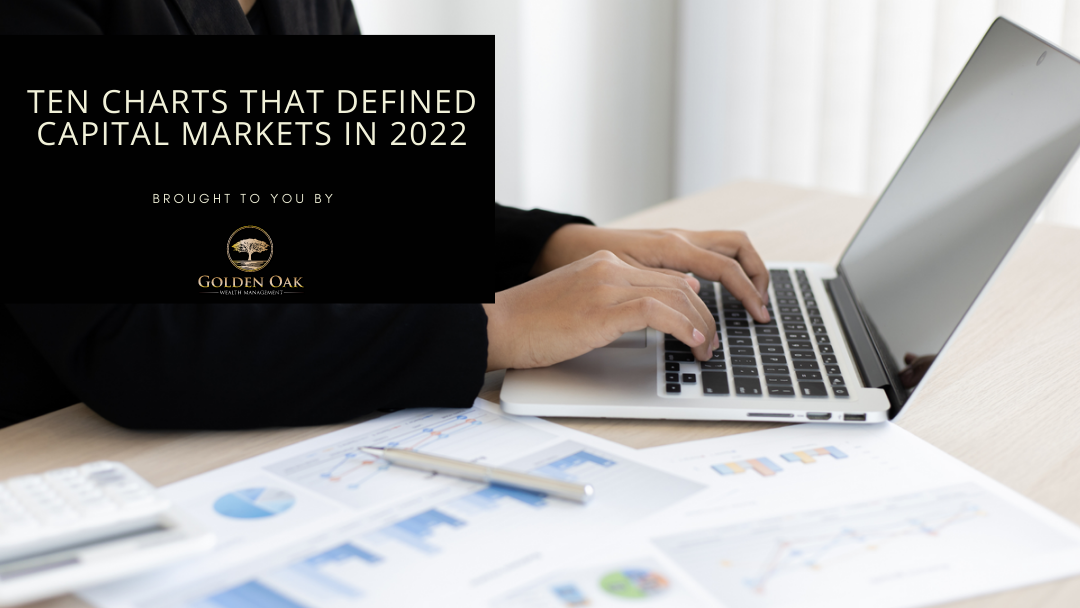 Most investors would like to put 2022 behind them. Before we close the book on the year, we’ve assembled 10 charts that defined the year—the year in pictures. Not surprisingly, most of the charts remind us of how difficult the year was for both stock and bond markets. However, we have included some positive messages in several of these charts, including the energy sector’s strong performance, the resilience of alternative investments, and the stock market’s impressive record of strong bounces coming out of bear markets.

The energy sector delivered remarkable gains in 2022, returning more than 60% to significantly outperform every other S&P 500 sector—no other sector has gained even 5% year to date as of December 27. Not only did energy stocks surge, they did so without help from rising oil prices. West Texas Intermediate (WTI) Crude Oil currently sits near $78, only a few dollars over where WTI crude oil started 2022 at around $76.

The energy sector may still have a spark in it and keep its momentum in 2023, bolstered by a potential rebound in Chinese demand. The path of the war in Ukraine remains a wildcard. LPL Research’s Strategic and Tactical Asset Allocation Committee maintains its overweight recommendation for the energy sector.

2) One of the most dramatic Fed rate hiking cycles ever

With inflation reaching levels not seen in 40 years, the Federal Reserve (Fed) took aim at a soft landing and believed there was a plausible path to avoid a recession. With that goal in mind, the Fed instituted a series of interest rate hikes that were the most aggressive in decades.

More rate hikes are coming, though the pace will likely slow to 0.25% increments after New Year’s. We don’t expect the Fed to cut interest rates until mid-to-late 2023 at the earliest.

Few, if any, historical indicators have been as good at signaling a recession as inversions in the U.S. Treasury yield curve—when short-term interest rates are higher than long-term rates. Although a recession in 2023 has become a consensus call based on a variety of economic indicators, the yield curve may be the most convincing. The 3-month/10-year curve inversion—historically the most predictive measure of the yield curve—is currently -0.65% (4.5% vs. 3.85% as of December 27), a strong indication of a potential recession in 2023.

In the event a recession does occur, it may be mild based on the strength of the consumer, still-healthy labor markets, and the amount of time corporate America has had to prepare for a widely-anticipated economic downturn.

4) Worst year on record for bonds

When stocks are down investors typically re-allocate to bonds, as bonds have historically exhibited a negative correlation to their stock counterparts. Unfortunately for traditional investors, that relationship did not hold in 2022, as both bonds and stocks have suffered double-digit losses over the calendar year with just three trading days left. Only four other times since inception has the Bloomberg (formerly Barclays/Lehman) Aggregate Bond Index (Agg) realized a negative calendar year return, with 2022 realizing the worst return by far. The previous worst year on record was 1994 with a 2.9% loss, far better than 2022’s year-to-date loss of nearly 13%.

2022 has made many investors question whether the 60/40 portfolio was dead. This year has been unprecedented in many ways. Since the inception of the Agg, the S&P 500 and the Agg have never been negative in the same year. Not only did that happen this year, it was also the third worst year for stocks and the worst year for the Agg since its inception in 1976. We believe the 60/40 portfolio still has some life in it and will fare much better in 2023 with support from both stocks and bonds.

If the rise in interest rates—closely tied to inflation—wasn’t the biggest story for capital markets in 2022, then it was second. Surging interest rates pressured stock valuations and caused significant losses in the bond market while putting significant pressure on the housing market by sending mortgage rates skyrocketing higher. In fact, the rate on a traditional 30-year fixed-rate mortgage rose from around 3% to a recent quote of over 7%. Although housing prices have not come down much in most markets around the country, they are unlikely to generate any gains in the coming year if mortgage rates stay high. Some of the downside pressure in home prices has been mitigated by geographic reshuffling.

It will come as no surprise to anyone reading about the performance of capital markets in 2022 that inflation showed up in a list of 10 charts that defined 2022. The accompanying chart really puts it into perspective, as you have to go back to the 1970s to find bigger price surges. Supply chain and labor disruptions from the COVID-19 shutdowns, pandemic stimulus, and the impact on energy prices from Russia’s Ukraine invasion were among the primary causes.

But where does inflation sit as of today? After many months of inflation coming in above expectations, investors finally got another favorable report with the November data reported earlier this month. Inflation is indeed easing and the Fed is on track to downshift the pace of rate increases.

The U.S. dollar had one of its strongest rallies in history in 2022, surging 18% from the start of the year through its 2022 peak in late September. Those extraordinary gains have subsequently been cut in half (with 3 trading days left in the year), leaving the greenback up a still-very strong 9% this year. The reversal coincided with the Fed shifting to a less hawkish stance and signaling smaller rate hikes going forward. Going a step further, the fed funds futures market has priced in cuts in the fed funds rate (the rate the Fed controls) in the second half of 2023, which could explain some of the recent weakness in the dollar.

The dollar influences markets and economies in several ways. One way is through currency translation of foreign-sourced profits. A strong dollar hurts earnings for U.S. multinationals operating outside the U.S. (and vice versa for a weak dollar). The dollar’s strength was a big reason why S&P 500 earnings grew only 2-3% during third quarter 2022.

The dollar also influences returns on international investments for U.S.-based investors, and trade, as a weaker dollar supports exports, while a strong dollar is a drag on exports. Finally, the dollar influences inflation by affecting the cost of U.S. imports for domestic consumers and businesses.

The S&P 500 entered a bear market in June of this year and, despite a valiant effort in August, was unable to dig its way out. We mark a bear market by a 20% or more decline from the closing high price for an index and the index exits a bear once a rally of 20% or more is achieved. The bounce off of the June 2022 lows through mid-August reached 17% but failed to broach the 20% level. At nearly one year old, the current bear market is now longer than the average post-WWII bear (11 months). At the October S&P 500 lows, the 25.4% peak-to-trough decline was larger than the average non-recession bear market decline since WWII (23.8%) and four percentage points shy of the average decline for all post-WWII bear markets (29.4%).

That’s the bad news. But keep in mind stock market rebounds following bear markets have been powerful historically. The S&P 500 has bounced back an average of more than 20% within 12 months coming out of bear markets. Looking at just the last seven bear markets since the 1987 crash, we have seen the market bounce back an average of 43.6% after dropping 33.1%. LPL Research expects the S&P 500 to produce double-digit gains in 2023, which seems quite reasonable based on this analysis.

10) Alternative investments have been resilient performers as advertised

This material is for general information only and is not intended to provide specific advice or recommendations for any individual. There is no assurance that the views or strategies discussed are suitable for all investors. To determine which investment(s) may be appropriate for you, please consult your financial professional prior to investing.

Investing involves risks including possible loss of principal. No investment strategy or risk management technique can guarantee return or eliminate risk in all market environments. For more information on the risks associated with the strategies and product types discussed please visit https://lplresearch.com/Risks

References to markets, asset classes, and sectors are generally regarding the corresponding market index. Indexes are unmanaged statistical composites and cannot be invested into directly. Index performance is not indicative of the performance of any investment and do not reflect fees, expenses, or sales charges. All performance referenced is historical and is no guarantee of future results.

Unless otherwise stated LPL Financial and the third party persons and firms mentioned are not affiliates of each other and make no representation with respect to each other. Any company names noted herein are for educational purposes only and not an indication of trading intent or a solicitation of their products or services.

All information is believed to be from reliable sources; however, LPL Financial makes no representation as to its completeness or accuracy.